It was interesting to read a little on Roman Family Law and how the eldest male of the family has legal rights over the other members in the family. The father has the legal authority to discipline the members of his household. They can send their daughters to live in some far off part of the empire if they create dishonor to the family. They have legal authority over their wives.

If they get divorced, she receives her dowry, and goes back under the authority of her father, and the children stay with the father's family. Things were much simpler then. 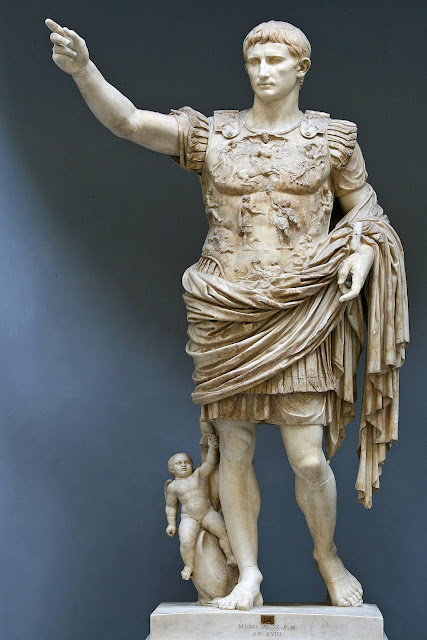 It was in this context that Apostle Paul wrote his instructions about how wives should be submitting to their husbands. Today, Pastors preach from the starting point of no-fault divorce, alimony, asset rape, and custody battles. Their point of reference is Feminist Law rather than Roman Family Law.

The role of the patriarch in the family is one with authority and responsibility. In some cases, the patriarch would be held responsible for the poor decisions of his children and wife.

An unhappy wife's only remedy was to divorce. It generally was not a very messy process at all with minimal Government interference.

Christian marriage is a legal and religious contract between two parties. What God has put together, let no man separate. In the system, the husband agrees to have the authority and responsibility to lead the household. The wife agrees to accept the husband's authority, acknowledging that he will be held accountable to God for how he leads. They both agree to have unlimited sex with only one another.

This is something that is not written out and signed by both parties prior. Usually, these expectations are not clearly spelled out prior to the marriage. Even if the Christian wife agrees to this at the beginning, she will soon discover that there are many "loopholes" that other Christian Pastors tell her about to get out of the contract.

In the Churchian world, the responsibility remains, but the authority has been stripped to protect women from "abuse" and when she's unhaaaaaapy. Pastors may provide lip service that the wife should be submitting to her husband, but they will provide numerous "exceptions" to the point that the wife can pretty much self-justify anything she doesn't like as the fault of the husband not leading well.

How many Pastors do you think counsel Christian wives unhappy with their husbands to spend one month just doing everything the husband asks instead of fighting over every little thing?


But I'm no DOOR MAT! I'm not his MAID. I'm his WIFE, not his EMPLOYEE! I just can't submit. That's just WHO I AM. Why can't he just love me for who I am? My rebelliousness and all? I'm tired of being the who has to change. He has to change. I JUST CAN'T TAKE IT ANYMORE! (this is code for, "I'm going to divorce him.")


The household should be lead by the emotional state of the wife.

This sounds insane, but things would just be a whole lot more clear if Churchians just said what they want clearly and directly, instead of trying to flower it up in Bible-speak.

This underlying mentality becomes reality once the unhaaaaaapy wife starts complaining to a Pastor. If you are familiar with the SSH, most of these Pastors are not Alphas. They are perhaps Betas at best, but generally they are social losers who get some kind of pleasure subverting the headship of husbands to make themselves look good.

The Pastor will provide a sympathetic ear and listen only to her side of the story. They will see her tears of how much she's abused. They will console her, give her a shoulder to cry on, and tell her, "Your husband is a very bad man. I will protect you from him. You did the right thing by coming to me with your problems. Let me show you how I can be a better emotional husband than what you have."

The Pastor believes it is his calling to protect the oppressed women of the world from the big, bad MAN.

She is so scared of her husband! She cries, and cries, shivering from her fright! The Pastor gets angry.

"You are a monster. I am protecting your wife from YOU."

I think this mindset is common among Pastors because they have a tendency to Pedestal Worship. They tend not to have slept with a lot of different women, and not realize just how evil, manipulative, and simply untrustworthy they can be. They just can't help themselves.

They get some kind of White-Knight adrenal rush, feeling powerful, that they can steal the authority away from another man. It's kind of like they stole another man's wife. They conquered.

In Roman Law, these Pastors would be violating the law. In today's Feminist Law, the woman will just file Divorce.

The whole point is to punish the husband and make him suffer until he capitulates to the demands of the wife so that she can be haaaaaaaaapy. The root causes of her rebelliousness are never addressed because now the frame of the relationship no longer is the husband's direction, but of the emotional state of the woman.

And now that the woman knows she has some beta-allies to usurp the tyranny of her husband's headship, she will be two times the rebellious bitch she was before.

On the other hand, if she knew the Pastor would just tell her she needs to submit to her Christian husband as she contractually agreed to in her wedding vows, and he would not interfere with such a sacred agreement, then maybe she'll just divorce the guy. Or maybe she'll figure out there's no beta-rescuers around who will interefere and choose to submit.

This half-way measure of causing the husband to suffer until "she's finally had enough" and inevitably leaves him to find a new White-Knight to save her from her unhaaaaaaapiness is just torture for all involved.

Just divorce him already.
Posted by Jefferson Kim at 7:39 PM