Owen Benjamin and Vox Day discuss a lot about Conspiracy Theories. In summary, conspiracies are the best explanation for past events and predictor of future events. A small group of people conspire to change or affect larger society. (ie. Food Pyramid)

Something happened around the 1960s and 1970s when certain words started being introduced to the English vernacular. The meta-theme of these words is regarding equality vs inequality. Are humans inherently different (creating a natural hierarchy) or is the hierarchy proof that there is some kind of social structure that creates these differences? (If you want to go even more meta, look at Aristotle vs Plato)

Regarding the differences between men and women, the Christian model places the husband in the authoritative role in the family. There has been a deliberate attempt to attack and dismantle this model using the legal system under under the guise of "Domestic Abuse." Unfortunately, many Christians do not realize just how subversive the term is to Christian headship.

If you think people hate being called "racist," imagine how much stronger a rhetorical attack is for someone called an "emotional abuser" or being a victim of "spiritual abuse" and "domestic abuse."

Here are some words I looked up on Google Ngram Viewer. It only goes to the year 2000. I’m fairly certain it’s become even more insane now, but this is good enough to get the general idea.

One of the things I discovered, thanks to Dalrock's blog, is the Duluth Model that may help explain the rise of the words "Domestic Abuse." There are probably better explanations, but this model is essential to how Domestic Abuse is viewed today.

Here’s a summary of the Duluth Model: https://infogalactic.com/info/Duluth_model:

The Duluth Model or Domestic Abuse Intervention Project is a program developed to reduce domestic violence against women. It is named after Duluth, Minnesota, the city where it was developed.[1] The program was largely founded by Ellen Pence and Michael Paymar.[1]
As of 2006, the Duluth Model is the most common batterer intervention program used in the United States.[2] It is based in feminist theory positing that "domestic violence is the result of patriarchal ideology in which men are encouraged and expected to control their partners".[2] Critics argue that the method can be ineffective as it was developed without minority communities in mind and can fail to address root psychological or emotional causes of abuse.[2]

The model has been widely adopted throughout the laws in the United States around the 1980s and the verbiage in the Puerto Rican law from 1989 essentially reflects the model.

This is the Power and Control wheel frequently used to label someone a “domestic abuser.” If you want to be the head of the household as instructed in Scripture, you will technically be an abuser according to this Model even if you never lay hands on your wife. Note also, that only the husband can be considered the Abuser. The gender pronouns are intentional. Men are the abusers and women are the victims: 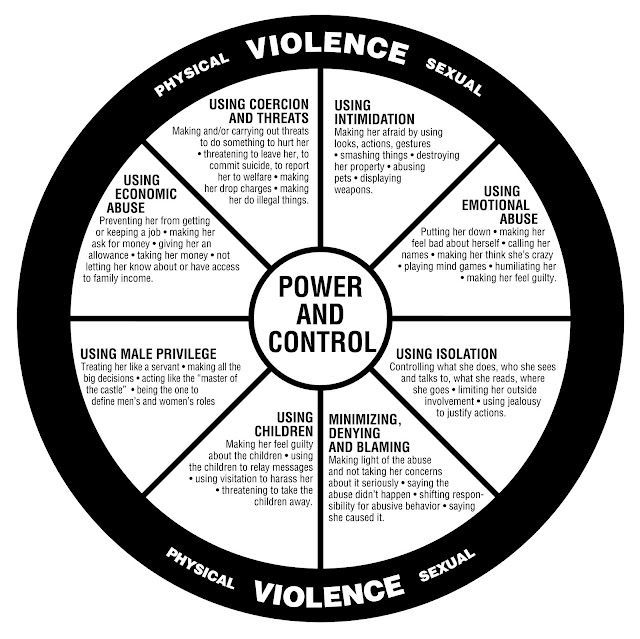 The underpinnings of the Duluth curriculum do come from a historical analysis. When Europeans came to this continent, they brought religion, laws, and economic systems that institutionalized the status of women as the property of men through marriage. From the church to the state, there was not only acceptance of male supremacy, but also an expectation that husbands would maintain the family order by controlling their wives. Various indiscretions committed by wives were offenses to be punished by husbands. This system of male dominance (like any social structure where one group oppresses another) was perpetuated by: a) a belief in the primacy of men over women; b) institutional rules requiring the submission of women to men; c) the objectification of women which made violence acceptable; and d) the right of men to use violence to punish with impunity (Dobash and Dobash 1983).

[…]
Do all men who batter want to dominate women? This is a complicated question. Clearly, many men who batter believe that women should be submissive to men and there are others who share a variation of these sexist beliefs—“The man is the head of the household” or “You can’t have two captains of one ship.” However, there are other men who batter that don’t believe that their wives or girlfriends should be subservient because of their gender, but they still batter. These men use violence to control their partners because they can and violence works. Violence ends arguments. Violence is punishment—it sends a powerful message of disapproval.

I recommend you read the whole document to understand the full scope of their intent. They are explicitly stating their intent to subvert, and flip on its head the teachings of Scripture. Biblical headship is domestic abuse when the inevitable time arises when the husband has to tell his wife, "no."

Dalrock’s blog goes into more detail on how the Duluth Model has infiltrated the church. Here are more entries about the Duluth Model on Dalrock's blog: https://dalrock.wordpress.com/?s=duluth. You will also find his commentary on "Complementarianism" to be especially informative.

No Feminist, anti-Christs from the 1970s get to override Scripture. There is no reconciliation or compromise to be made with these God-hating, egalitarians. As expected, Cuckservatives & Churchians conserve nothing and have essentially adopted a watered-down Duluth Model into their worldview confusing their flock to what Biblical submission looks like.
Posted by Jefferson Kim at 11:40 AM