Let's Do The Hyperinflation Math

Most of the money we spend is simply debt on a bank's balance sheet. You can lookup the physical cash in circulation compared to the total USD money supply.

This data is from the D.3 Credit Market Debt Outstanding by Sector, Flow of Funds.
https://www.federalreserve.gov/releases/z1/20200312/html/d3.htm

Here is the data I collected in graph forms: https://docs.google.com/spreadsheets/d/1Up6Za6lOemFi_84KkzDh4JwMkuLnzgrFv1fbBfd9sWg/edit#gid=0

Numbers are denominated in Billions. 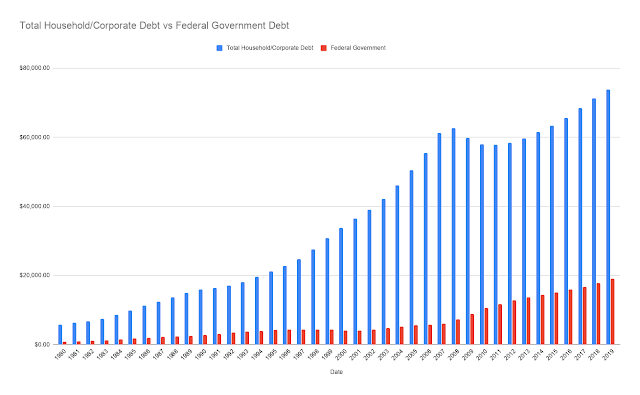 What inflationists fail to do when declaring that the US Government is borrowing too much money is that it is only in relation to itself. So we can see it's increasing and decreasing, but we don't know in relation to what. Often times it is in relation to GDP.

I'm more interested in relation to TOTAL money supply. That would be total debt from households, businesses, and corporate. More specifically, these categories:

Let's look at the data beginning 2008, when the total money supply peaked, and then shrank. 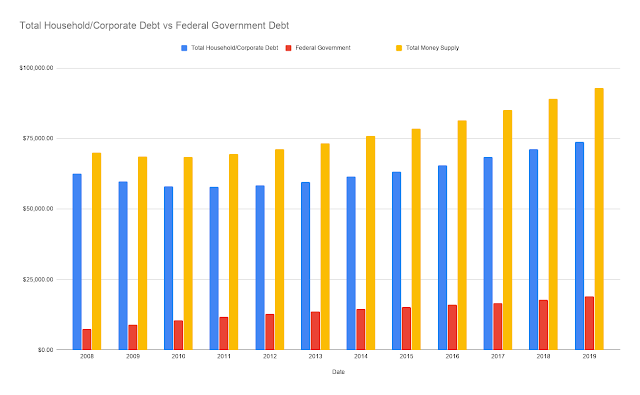 Weren't those the glory days of the Hyper-Inflationists?

I wasn't really paying attention back then, so I don't really know. When I look at the data in relation to the overall money supply, I'm not seeing Hyper-Inflation. I only see DEFLATION from 2008-2011, which were during Q1 & Q2.

The Federal Reserve couldn't keep up.

Obviously, inflation is occurring. The Total Money supply is increasing. The Federal government keeps increasing its proportion of the overall money supply.

But what is the definition of "hyper-inflation"?

I think it has more to do with the velocity at which the total money supply increases.

I see a definition of more than 50% per month (https://infogalactic.com/info/Hyperinflation). I think this means that the total money supply would need to increase 129 times larger in one year.

In this situation, we are assuming that the increase of the total money supply is from the Federal Government printing money. Private entities do not have the power to create more money, so they would remain the same.

Currently, the Federal Government has $19 trillion, so the Federal Reserve would need to print 629 times more than that.

In the hyperinflation incidents that have occurred in history, there were some other, major underlying issues with the economy or war situations. Vox Day has done more analysis on each of the hyper-inflation scenarios.

Basically, the countries were fucked anyway. Correlation does not mean causation. It's probably the other way around.

How does $1,000/month for every family in the United States sound?

That would be a 1.6% increase in total money supply each year assuming no reductions in any other program.

What is the number you would like to see to call it "hyper-inflation"?

Without UBI, the total money supply was already increasing at these rates:

3% is the "accepted" rate of inflation.

Tell me the scenarios you have in your mind, and let's run the numbers.

I think you will find the "hyper-inflation" math doesn't make sense.

That's not to say that there won't be a big reset.

If hyper-inflation is not a reality, then, the next reason for a collapse is a deflation. That's when all the private sector debt starts getting written off because of all the bad investments, and the Federal Government cannot print enough money, like they couldn't from 2008 - 2011.

How Much Would The Fed Need To Print?

If the private sector debt were to decrease:

If you want to increase the money supply (debt), the best way is for the private sector to take on more debt. Unfortunately, we've reached the peak saturation of debt that people and corporations can handle. They are imploding and defaulting instead, thus creating deflation.

I'm mainly regurgitating and processing what Vox Day has written on this subject but applying it more directly in ways I can understand. I may be misrepresenting what he's saying and not making any sense. I still have lots of holes in my head about this whole thing and will post more as things become clearer to me.
Posted by Jefferson Kim at 2:27 AM