Vox Day made a subscriber's only Darkstream #621: White Privilege is Civilization. In the video, he summarizes his article he wrote in 2017 with 2014 numbers.

The original author updated the data with 2018 numbers. (Archive link: https://archive.is/WwgqF). The author also made a video version explaining the data.

The average annual net tax/benefit broke down as follows per person:


I calculated this by taking the aggregate Net Effect by Race/Ethnicity (below), divided by the population of each racial group. 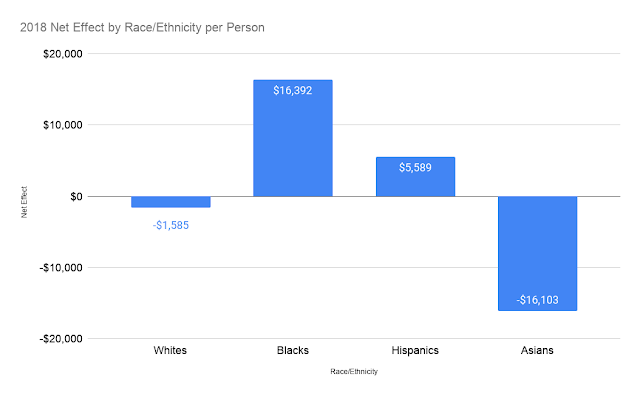 In other words, each White individual is paying $1,585 more into the system than they receive in order to support Blacks and Hispanics. Each black individual receives $16,392 in Government services than they pay. Each Hispanic individual is receiving $5,589. Each Asian is paying $16,103.

Here is the tax Revenue/Government Usage by Race/Ethnicity per person. 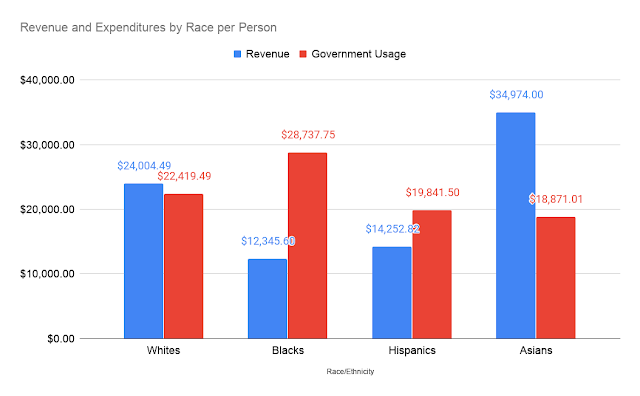 [Back to my Commentary]
Vox Day makes some calculations I don't really understand and makes a conclusion without looking at the Asian data. The conclusions are the same, but the added Asian twist makes things quite amusing.

Here are the Net Effects aggregated among the entire racial groups: 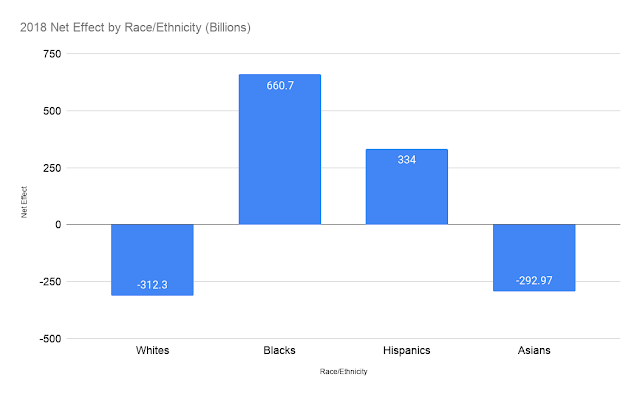 Assuming the following life expectations, you can see the total Net Effect over a projected lifespan by race:

Which looks insane when graphed out: 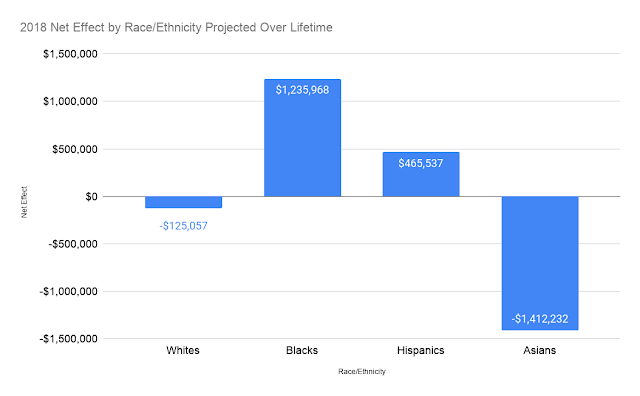 The math for me is a little too complex. As much as I would like to continue Vox Day's conclusions of how much the White Family is paying for the Blacks and Hispanics, the magnitude of the Asian "contribution" into the system is too blinding for me to go any further.

Breaking up the Race population as a percentage:


I will need to see the calculations of the cost of supporting Blacks and Hispanics for the average Asian family and White family for some perspective. Just eyeballing the data, the Asians are disproportionately taking up the burden. If factoring in lifespan, it takes 11.3 White individuals to make up a single Asian into the system, but this isn't even a fair comparison as the average ages by race are as follows:
Considering the average age of Hispanics are 11 years old, one could perhaps make an argument that they will be a higher Net Drain. So perhaps as the Hispanic population ages to the high 20s like the Blacks and Asians, we will be able to see better their Net Gain/Drain into the system.

Asians are half the age of Whites, and I'm assuming that if you had an average age of Asians at 58, like the Whites, Asians would match Whites in expenditures.

Going back to the individual contribution:

For Blacks, since their average age is almost equal to the Asians, you can see just how contrasting the differences are between the two. In essence, each Asian individual puts more into the system an equal amount as a Black drains the system. One Asian individual covers the drain from three Hispanic individuals.

I will have to place a general suspicion on the Asian data based on the Frankenstein approach of trying to gather the data from multiple sources, but it's still amusing to me to go forward with my analysis.

(You can see all my data calculations on my shared spreadsheet here: https://docs.google.com/spreadsheets/d/17_VfI9u3_mfLzFUulCyveaG6bB8bbbLcSatmezo_k0M/edit?usp=sharing)

LOOKING AT THE EXPENSES
It is unlikely that earnings potential can be changed drastically by individuals, so the only other option is to cut expenses.

Here's the original author's chart by race and aggregated: 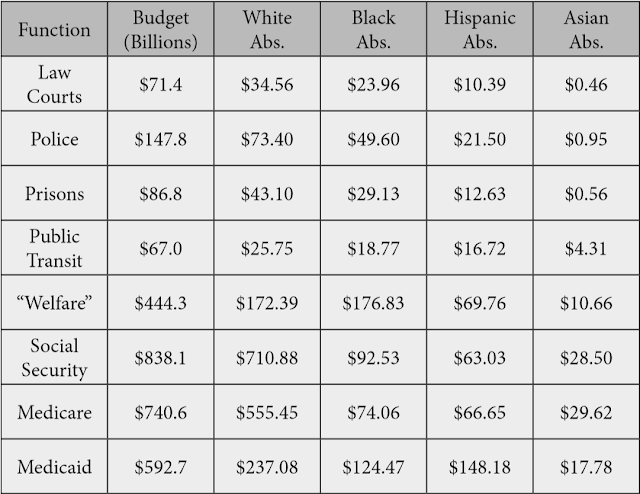 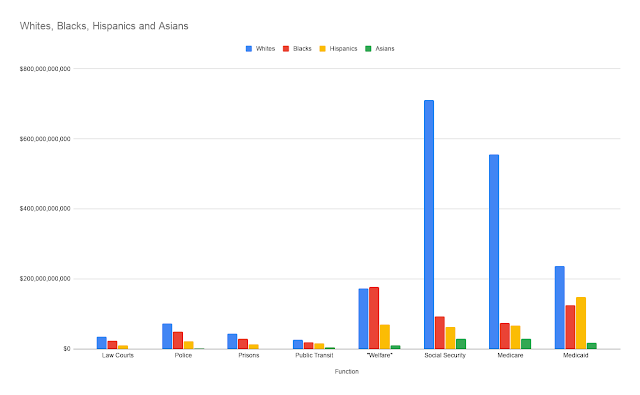 Same graph but broken down to PER CAPITA: 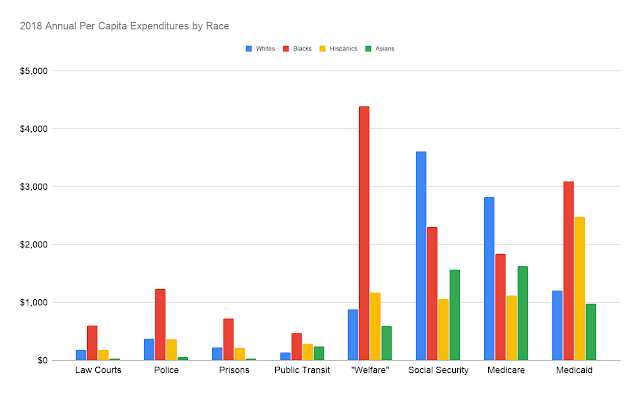 Here is the above graph but in table form. I will highlight place in bold the highest Government Spending per Capita.

If you're looking at improving the Tax Revenue, it's obvious that you would want to import more working age Asians. For Hispanics, I'm not really sure what policies you can put in place to increase the average age from 11 years to 29. Tax Revenue would increase noticeably if you figured out a way to do so.

If you want to get more specific with Asians, you would definitely need to be importing more Indians since they make the most money of the Asian groups. There are 100 million Blacks and Hispanics, and 18.2 million Asians. The ratios are 1:1 for Blacks and about 3:1 for Hispanics based on current Net Outflows.

Using those ratios, you would need to import about 42 million Indians (or 12.66% of the current US Population) within a very short time frame. The shorter the better. The number would obviously increase based on the increased Black and the 11-year old Hispanic population.

The population of India is 1.353 billion, so 42 million Indians would represent the top 3.1% of the current Indian population. The average IQ in India is 81 and the United States is 98 according to this site. Assuming a standard deviation of 15, we will need to import every Indian (who's not already in the US) with an IQ of 109 or higher. 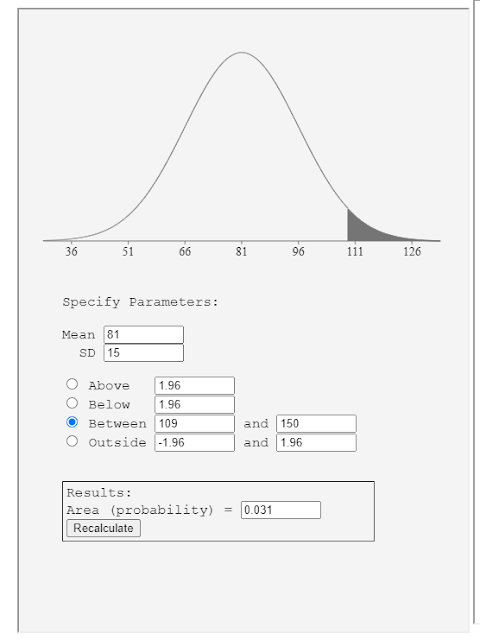 India will suffer greatly by losing all their highest IQ people, but it is a price we, as Americans, should be willing to pay to balance the budget and maintain the seemingly hopeless deficits from the Blacks and Hispanics. The additional upside to the United States is that it will raise the average IQ of the United States (sorry, India).

Just to give a sense of scale of what 42 million Indians would look like, imagine the largest State in the Union, California. California has 39.5 million people in it. So imagine importing an additional California, but they are all Indians.

If you're looking to cut expenses, then you can look at the above table and just start cutting services. When looking at things like the Justice System, it's simply not really a large expenditure item compared to Welfare, Social Security, Medicare and Medicaid.

Anyway, I'm sure you can think of some better solutions than me now that you've seen the data. I'd be interested to read what you've figured out.

(UPDATE: To clarify, my "solution" is intended to be so ridiculous as to emphasize how inevitable the collapse of the United States is.)
Posted by Jefferson Kim at 10:18 AM