Vox Day is right: Europe is not overrun by Muslims

Thanks to cuckservatives and civic nationalist "right-wing" media, they try to portray places like France as "overrun" by Muslim radicals. It is a compelling narrative. Vox Day mentioned on one of his Darkstreams that the Muslim immigrants are concentrated in walled sections of cities that makes removing them easily when the time comes. Supporting Vox Day's observation is that France shut down over 70 mosques and expelled 231 radicals after a beheading:

“We must expel 231 foreigners from French territory, who are residing there illegally, and are being pursued on charges of extremism, including 180 in prison,” France’s Interior Minister Gerald Darmanin announced in a recent press conference.

In a separate tweet, Darmanin wrote: “The fight against radical Islam: In the month of September, 12 places of radicalization have been shut (businesses, schools, culture centers…). That is 73 places closed down since the start of the year.”

I will note it is ironic for Americans, for which 40% are minorities, to be criticizing minority rule of a country like France (8.8% Muslim). Get the plank out of your own eye.

Also, could you imagine the US President closing down 231 mosques in the United States or any level of government over Islamic extremism? The expelling has only occurred because it's Donald Trump. But any other Cuckservative or Democrat would most likely never do so because of "Racism."

I would also observe that Europe has a much longer history of repelling Muslims with bloodshed than the United States has. At least for Florence, they have a long history of expelling their fellow Florentines. I don't think they'd have any problems eventually expelling any foreigners.

If the next crusade launches, it will be in Europe. 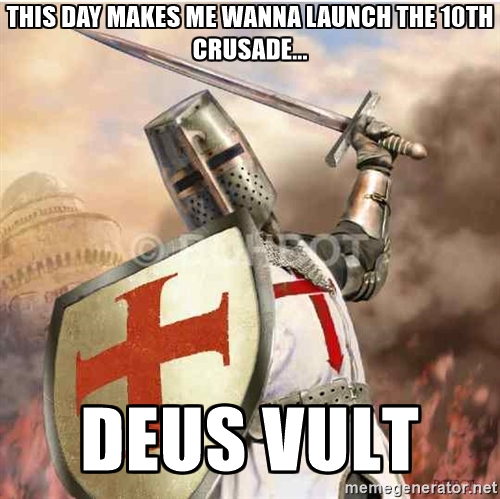 Posted by Jefferson Kim at 6:27 PM